E-Waste: 6 Ways Tech Companies Can Solve The Problem They Created

The amount of toxic e-waste that the world produces every day should anger you. Annually, we produce an average of 7 kilograms of e-waste per capita. The wealthier you are, the more electronic waste you produce. In Europe, per capita e-waste generation is 16kgs, in Asia, it’s only 5.

The global e-waste problem is a complicated matter.

Let’s look at these few facts for me: 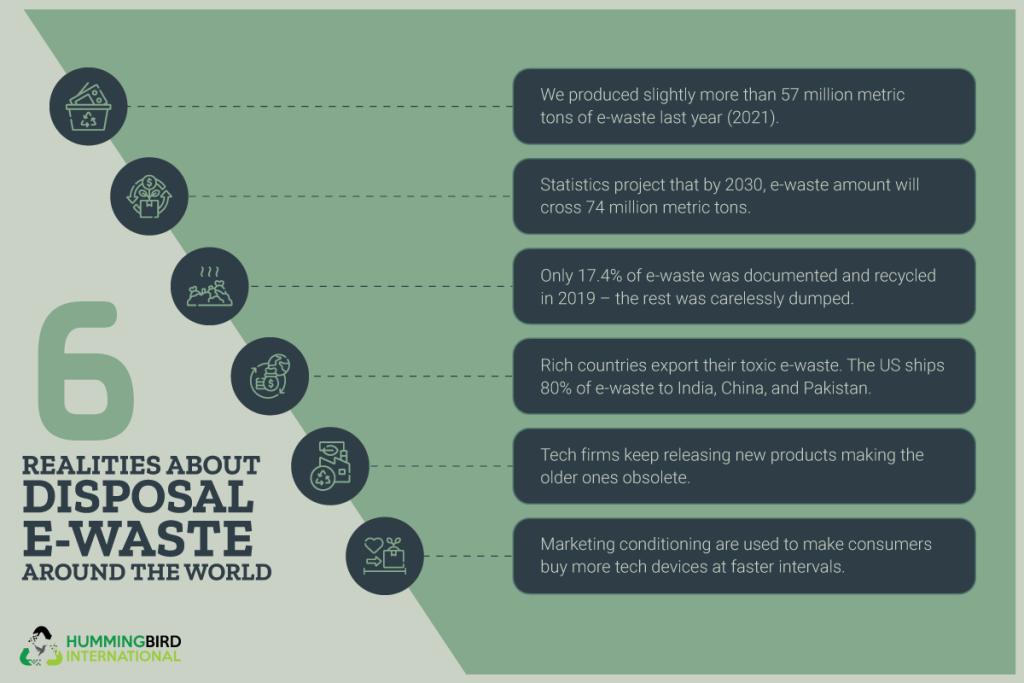 Looking at all this, one thing becomes evident: managing the global e-waste problem needs a bigger commitment than anything anyone can do at an individual level. Sure, recycling is an option but Big Tech needs to wake up and clean their act. Apple, Samsung, Microsoft, Amazon – all these giant technology companies produce millions of e-waste every year and still perpetuate the need to buy more.

Here are 5 initiatives we suggest for these tech firms to step up, accept responsibility, and clean up their mess.

Proper e-waste recycling sounds like the ideal consumer behavior. Getting rid of the toxic materials and repurposing the useful ones is all that this movement is about. But it comes at a cost. E-waste travels thousands of miles across the world to get dumped into landfills. From there, rare earth materials are separated from the trash and repurposed for secondary use.

The process of dismantling the devices, extracting the materials and minerals, and incinerating what cannot be used is a toxic process that harms the environment, communities, and even abuses child rights. It’s mostly children in developing communities that are tasked to handle this waste and separate useful from the junk.

Plus, the carbon footprint of this e-waste traveling from Europe and North America to Asia and Africa further makes you question the e-waste recycling norms.

What is the answer then?

Imagine if Apple, Amazon, and Microsoft all had these micro-factories at their wholesale stores or other locations. In one go, you get rid of carbon commutes, the hassle of managing multiple facilities for various stages of the recycling process, and the irresponsible behavior of burdening underdeveloped communities with a toxic problem they are not equipped to handle.


Veena Sahajwalla – a material scientist and engineer – has already launched a few of these micro-factories across different locations in Australia and has seen the results. If more tech firms can adopt them and make recycling a part of their product cycle, we can expect to see an immediate improvement in our recycling stats as well as on the planet’s health.

Repurposing the e-waste goes hand-in-hand with recycling. When we separate the useful parts of electronics from other trash, it can be used to create so many new things. Olympic medals, for example. Did you know that Tokyo Olympics used 100% recycled e-waste to create their gold, silver, and bronze medals?

If you are not on the Olympics committee, there are tons of other crafts you can produce by repurposing your e-waste. Jewelry, office stationery, home décor items. But at the industry-level, this repurposing can produce solutions that make human lives easier, make communities thrive, and improve daily living.

PowerWell is a tech company that uses recycled lithium-ion batteries to turn them into renewable energy sources for home, allowing consumers to use this energy for light, phone charging, and more.

Apple is also making strides in trying to adopt more sustainable production practices. Not only it only partners with supplies that commit to 100% renewable electricity, but the company has also doubled its efforts to used recycled materials in its iPhones and watches. The newly released iPhone 12 and Apple Watch Series 6, for example, are made with 99% recycled tungsten. Cobalt used in these devices is also recycled from older devices as well as 40% of all material in MacBook Air with retina display.

Did you know that in the US, the tech lobby actively campaigns against legislation that allows consumers access to information and tools needed to repair their old devices? We talked about Apple’s commitment to the environment, but this company is also notorious for creating products that do not last long, are not compatible with accessories that are readily available in the market, and give no information to their consumers that will make the product repairs easy.

While the European Union has acknowledged the consumers’ right to repair their devices, the tech lobby in America is aggressively against it. In a nutshell, the right to repair demands manufacturers to “facilitate repairs by making spare parts and repair information cheap and easy to access”, reports The Vice.

But Tech Corporations like Microsoft and Apple continue to fight against bills that could make electronic repairs a norm. Some of the common arguments these companies cite for their stand include:

Yet, the real issue is about money and power. The tech giants do not want to give away their secrets. Their businesses are built on relentless consumption and repair experts helping consumers hold on to their old devices for longer is not good for these tech corporations or their bottom lines.

It’s time for politicians and lawmakers to fight this pressure. Make the right-to-repair the law of the land so every time a battery dies down or a screen gets broken, repairing it is easily available, cheap, and common.

Tech companies need to design better products. Ten years ago, when a new phone was released, you can spot the upgrades in performance and quality. It’s not the same anymore. Whether you consider hardware or software improvements, the differences are negligible. Yet, the companies keep releasing new phones every year or two.

Additionally, these devices do not come with parts that can be separated, fixed, and repaired. Instead of screws, parts are joined together with glue. Taking them apart renders the whole product worthless.

Modular electronics – with replaceable parts and longer lifespans – are the future of sustainable tech. We can’t keep using earth’s rare minerals for poorly-made devices that won’t last two years and then dump those painfully sourced minerals to our landfills. This system is not going to last. Sooner or later, sustainability has to enter the equation otherwise the industry might be heading towards self-destruction.

5. End the Culture of Obsolescence

I remember the time when it used to be 1 phone every couple of years, and every time a company released a new model or a new product, it used to be a cause of celebration. An innovation festivity. In 2020, suffering a global lockdown, did you even know that Samsung had released 15 new phones? And why? What earth-shattering tech innovations could they possibly have made that required 15 new phones?

Again, it’s relentless consumerism that is being carefully constructed and sustained. Huge tech companies use almost bottomless marketing budgets to create snazzy ads and attractive campaigns to convince people that they need to buy the latest gadgets.

With shorter lifespans, devices that can’t be repaired, hardware that becomes obsolete with newer software updates – these companies create a culture of obsolescence. From a Machiavellian point of view, it makes sense. These are businesses whose financial streams depend on the constant demand for newer products. This demand is kept up by making products that need constant updates, upgrades, or entire replacements.

But it’s a lazy model of business. In time, it will cease to work because it simply cannot be sustained. Companies need to come together to figure out how they can keep their profits up by also making products that work for consumers for longer, are easy to repair, and do not need constant replacements due to frequent software updates.

A combination of solutions is the answer – not a one-step program. Industry-wide, the technology companies need to keep aside their competition and incessant pursuit of profits to figure out sustainable e-waste management solutions that help consumers, communities, and the planet.