E-waste is a concerning issue in almost every part of the globe. It is also growing at an exponential rate due to the introduction of low priced electrical devices. How is electronic waste disposal handled? A post in ‘theguardian’ quotes the United Nation which claims that most electronic waste is dumped in developing countries and often illegally. The waste is often processed manually under extremely toxic conditions. What are the global implications of irresponsible dumping of electronic waste on the developing world? This post discusses where electronic waste is treated and what the environmental repercussions are for the people that are tasked with the responsibility.

In order to determine that, we must first see how the problem impacts on a global scale, particularly in the developing world. End of life or electronic waste items are often transported to developing nations by First World nations often in violation of international law. Interpol found that over one in three containers that leave the EU contain an astounding amount of e-waste. Countries like China have tried to curb the influx of the waste by banning its import in 2000. However, their efforts proved to be vain; Guiya, the epicenter of e-waste scrapping is still accepting such imports on a regular basis.

The task of processing the waste is usually given to the desperately needy populace. In Guiya, the poorer residents use unsafe and crude method to separate valuable methods or components from mounds of imported e-waste. These dangerous practices include, but are not limited to –

There is no specific consensus to how much e-waste is exported every year. Experts suggest that over 50 to 80% of it is exported to developing countries from developed nations like the US. In fact, a UN StEP initiative also warns that e-waste is expected to grow by 33% during the next four years. It also estimated that the waste may weigh as much as eight of the great Egyptian pyramids.

In 2008, the GAO (Government Accountability Office) published a report which proves that, “…a substantial amount ends up in countries like China and India, where they are often handled and disposed of unsafely. These countries often lack the capacity to safely handle and dispose of used electronics if the units are not in reusable condition when received, and the countries’’ extremely low labor costs and the reported lack of effective environmental controls make unsafe recycling commonplace.” 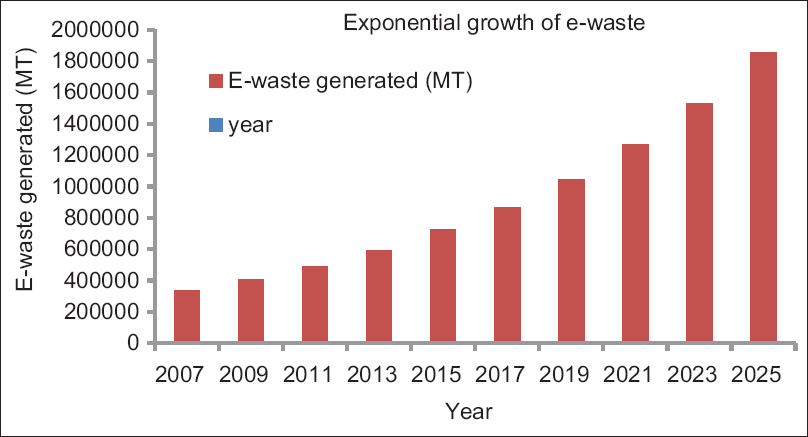 Electronic waste is a growing hazard and developing nations need to take notice especially since the demand for electronic devices doesn’t seem to show any signs of slowing down. The implications may not be apparent for populations in the developed world. However, for developing nations, the environmental repercussions of illegal e-waste dumping are too real.